.J. Simpson is currently serving 33 years in prison for his contribution to a kidnapping, arms felony and robbery charge was granted parole on July 20, 2017, at approximately noon. While I am not attempting to exonerate him of any crimes, I wanted to see if there is some correlation to the stars for these events.

(2) He also has a Pisces Moon.  This is a difficult aspect as people who have the Moon in Pisces feel everything going on around them and have difficulty understanding what they are feeling versus what other people are feeling.  Pisces Moons have trouble with boundaries and are psychic sponges.  This is exacerbated by the fact the Moon is in the 8th house of secrets, death and transformation.   Many people with Moon in the 8th house feel they have been abandoned by the mother or that the mother has died.

(3) Besides the Moon in Pisces, he has Pluto and Saturn in his 12th house.  The 12th house is the house of the unconscious, self-undoing, and institutions.  Planets in the 12th house usually represent hidden issues.  Saturn can represent the father and Pluto can be about power, control, and as well as taboos around sex.  According to Wikipedia, O.J.’s father was a well-known drag queen and later came out as gay.  As a young man growing up in the projects in the 1950s, it probably did not bode well for him resulting in bullying and fights.

The bullying could have been the reason for him joining a street gang in his early teens.  Judging from the astrology, this would have been around June 1960 making him 13 years old.  Since his Sun is in the 11th house of groups and organisations, that would make sense.  He needs to belong to a group or an organisation.  He was arrested three times before Willy Mays talked to him into turning his life around.   When he started playing football at which point the team became his group.

As we can see, O.J. has had a difficult start to life, and he did not have the modern understanding of sexuality and family dynamics, which could have steered him to a better path at that time. 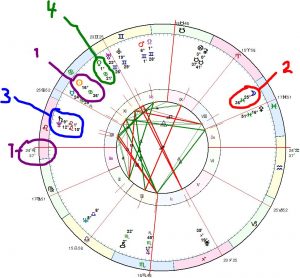 (4) Venus, the planet that naturally rules relationships is unaspected.  In other words, it does not connect with other planets in his natal chart.  Uranus will which co-rules Aquarius on the 7th house of relationships makes a positive aspect which makes him easy to connect with but the underlying Saturn, the ancient ruler of Aquarius is in the 12th house of undoing and connected to overbearing and controlling Pluto.  When Nicole Brown Simpson asked for a divorce, this control issue and the “dying mother” theme were activated within him.  While he was not convicted (that is another story) at the time, he had an eclipse on his Midheaven reflecting how he was viewed in the world.  Eclipses have been viewed as a bad omen since ancient times.

(5) Solar Arcs are a predictive technique to determine the timing of events.  At the time of his arrest for the robbery and kidnapping, his Solar Arc Moon which rules his 12th house of institutions, prisons and self-undoing was in a harsh aspect to his Ascendant (who he is).  The solar arc suggests he would be arrested. 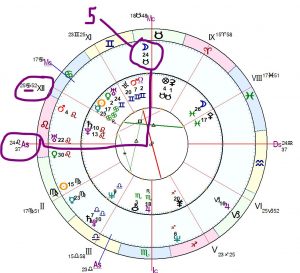 (6) Fast forwarding to his parole.  On July 20, 2017, at approximately noon PDT, O.J. was granted parole.  In his Solar Arc chart, he had Solar Arc Sun, the ruler of the Ascendant (who he is) squaring Uranus, the planet of freedom. 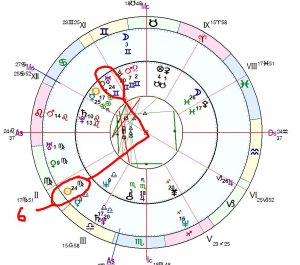 (7) In transit (current planetary placement) Jupiter (judgment) is square or in a difficult aspect to the Sun (his identity and ruler of the Ascendant or who he is) and Pluto (secrets, power) is opposite his Sun.  This is very interesting because it wasn’t an easy transit and suggests that something is going on behind the scene in order to let him go.

(8) Even the previous eclipse is square (difficult aspect) to Mars ruler of the 9th house of law and justice. 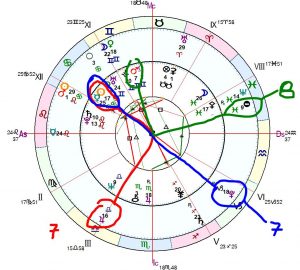 Both the 7 & 8 occurrences could suggest he is undergoing a transformation.  O.J. will be released on October 1, 2017, if everything goes according to plan.  At 70, we hope he will no longer be a threat to anyone.

Whether you are a cusp or not, why not book a reading to understand how you behave and what progressed cycle you are in.