Why Get Astrological Reading?

Why would you get a forecast from the Weather Channel on TV or the radio?  Maybe because you want to bring an umbrella, sunscreen, or a jacket with you, right?  That is the same reason for getting an astrological reading.   You want to know what is going on in your life.

From YOUR astrological birth chart all the information about career, money, love, health and children can be seen in it.  Timing is everything they say, and the chart can tell you best time to act or when not to.  The chart can tell you how long events in your life will last.  Your birth chart will tell you how you will react to certain thing in your life.   Major life shifts appear in the chart from job changes, marital difficulties and even locational moves.

Relationship issues?  Astrology can tell you about how you and your partner interact:

If you want to know the deeper meaning of what is going on in your life, then book a reading!!   Readings include an mp3 recording.

If you want to know more, see the column further down the page for a bit more information and links to articles. 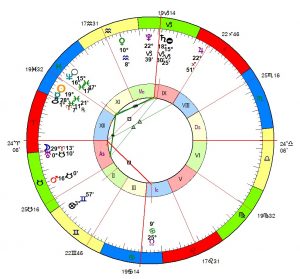 As you can see from the diagram, there is a fair bit more to astrology than just know the zodiacal placement of the Sun, as in “Hi baby, I’m an Aries. What’s your sign?“.   When people refer to their sign, it means the Sun was in the sign of Aries when they were born and that only tells you part of the picture.

In a natal chart there are 10 significant heavenly bodies: Sun, Moon and 8 planets (Earth excluded)…no, make that 7 planets and one that was formerly known as a planet. There are 12 signs. There are 12 houses, each of which represents a different facet of life. I will examine the relationship of the planets to each other, which sign they are in and within which house they reside. From this, I can tell a person about her parents, her siblings, the men she attracts and why, how she thinks, if she will be religious or spiritual, and how the person will handle money. Even a person’s face and body shape can be derived from the chart. Again, it is up to the person to decide how to manifest their potential.

The study of astrology dates back thousands of years as our species looked to the sky and started to notice connections between the alignment of the stars and events on Earth. At the moment you took your first breath, the planets were in a particular alignment. They somehow left an imprint on you. You can even think of it as the Divine’s DNA for your life mission.

Several societies used astrology from the Babylonians to the Indians to the Greeks, Egyptians and Romans. During the dark ages, Islamic astrologers made strides in the art and reintroduced it to Europe. During the Renaissance, most people of nobility had a personal astrologer. One of the most famous astrologers from this time period was Nostradamus. Another astrologer by the name of John Dee was Queen Elizabeth I’s personal astrologer. Science and Astrology at that time went hand in hand – Sir Isaac Newton could cast and interpret an astrological chart.

Astrology is not the sun sign horoscopes that you read in magazines or newspapers. Astrology is a personal snapshot of you. It can indicate what issues you have and will be facing as you cycle through your life. It is a great tool for understanding yourself, family and friends.

The branch of astrology know as Horary is based on the similar premise as the natal chart, except that instead of dealing with the birth of a person, we deal with the birth of a question. The chart is then judged according to various rules of Horary astrology. The master of Horary Astrology is a gentleman from the 1600’s by the name of William Lily, who wrote his famous text Christian Astrology which is still referenced today.