The United States has entered a tumultuous period in its history.  The country is leading the world in Corona Virus infections and deaths.  There are the deniers on one side who claim it is all a hoax and others who have taken heed of the medical society warnings.  People have been shot for asking someone to wear a mask before entering a store.  While most world leaders have taken the necessary precautions to stem the spread, President Trump has gone against his medical advisors and is trying to reopen the country’s economy too quickly for some but not quick enough for others.

There are several charts for the USA.  The most popular one is the Sibley chart (17:10 time), but I find that my friend, Alphee Lavoie’s chart (16:56), seems to be a bit more accurate.

Looking at the chart for the effects of Covid-19, and you can see that Venus, the planet that rules the 6th house of work and illness in the USA chart, entered the 6th house on March 21st. (Another confirmation for the Lavoie chart). 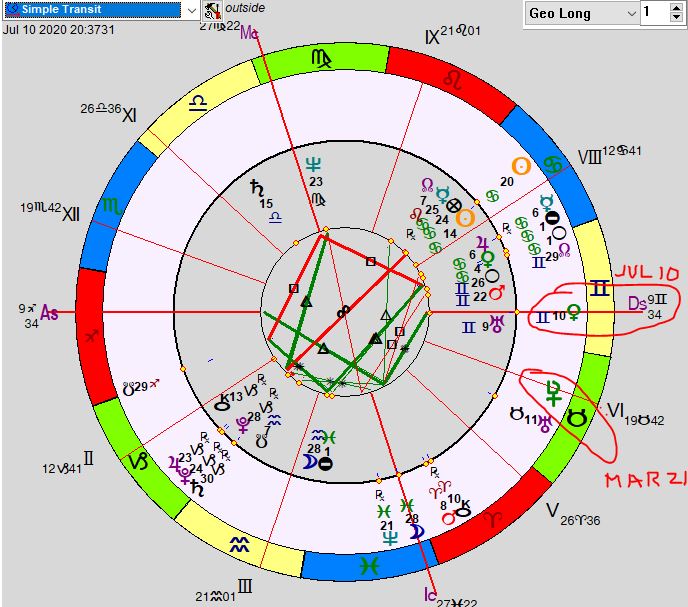 From the table below you can see that it coincides with the increase of Covid-19 cases, 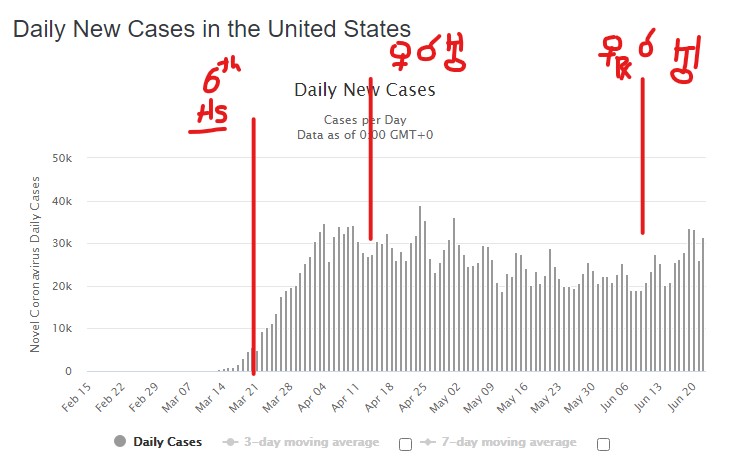 Venus will leave the USA’s 6th house on July 10th, but it will enter the 8th house of death and transformation on August 20th.  This could be viewed as what the medical experts are calling the second wave.   On August 21st, Venus will hit the Sun of the chart of the USA.  The Sun represents the leader of the nation, so this could mean that the Covid-19 situation will come to roost or even potentially, Trump will get it.   Venus will leave the 8th house by September 23rd signifying the end of the second wave for the USA.

This Covid-19 situation has now become a secondary story.  The fatal killing of a black man, George Floyd, at the hands of a white police officer was the catalyst of both protests and riots across the nation which have spread to other countries.   At the time of the incident, three things were at play: 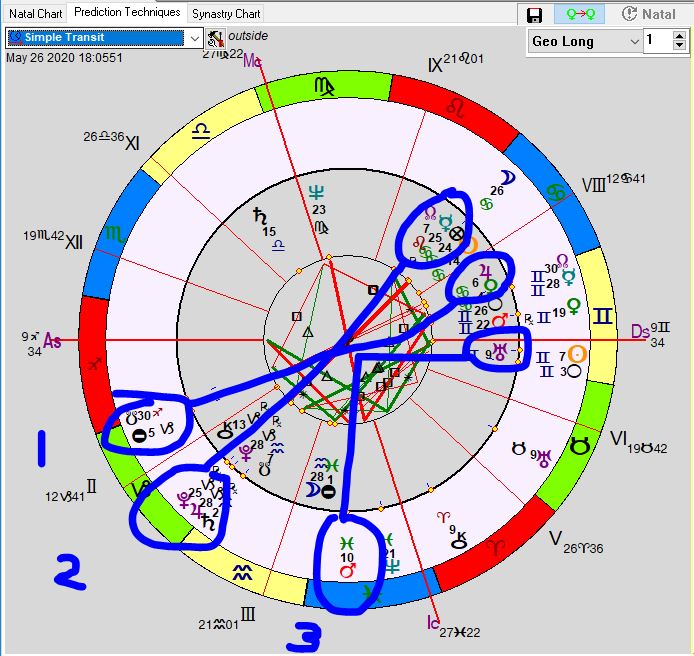 What does this mean?  It means the people are feeling oppressed and they are angry and will express themselves and with the Mar/Uranus configuration, it means they will riot.

So, the riots have slowed down but are they done?  Unfortunately, it does not seem to be.  Transiting Mars enters the 4th house of the US chart meaning the land, and will pass opposite to the USA’s Saturn and square the USA’s Sun on July 25th.  This will last for a week.  Mars will then get to 28° Aries at which point it will station retrograde, meaning it stops (or appears to stop) moving while squaring (challenging aspect) Pluto and station or stay around that degree for a period which will last for all of September.   Mars will work its way back to be opposite Saturn and square the Sun as it stations direct, this will last for just a bit longer than a month and will take the entire month of November before it moves on.  When a planet stations it means it holds its energy at the at that point. 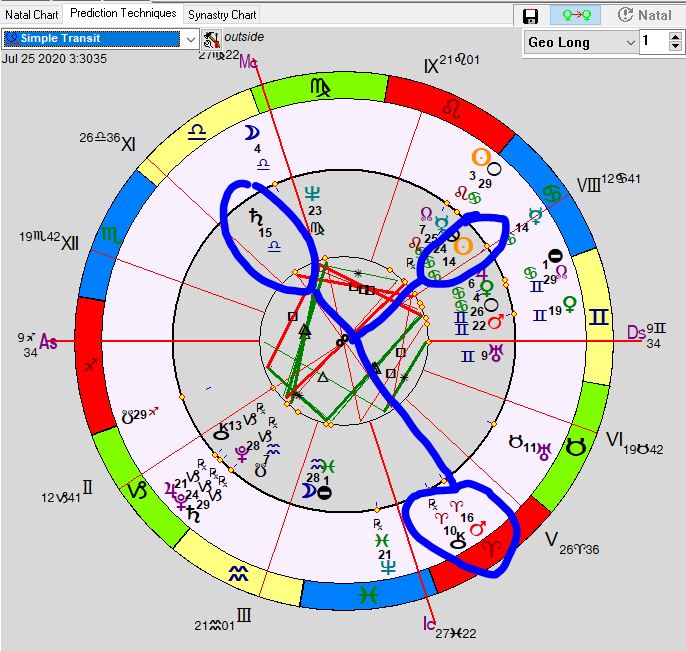 Let’s break down this meaning for you.  Mars is the planet of action, fighting aggression.  When it goes retrograde, it usually brings up issues that have been brewing for a while.  September and November it will remain steady triggering severe conditions.  You need to remember the planets are not creating the situation, but they are merely reflecting what is going on.

Saturn is the planet of the status quo and authority; it occupies the USA’s 10th house of the government.  The Sun is the leader of the country and the country’s identity.  In the USA chart, it is in the 8th house of other people’s resources.  Mars will be opposite Saturn and square the Sun for a few days around July 25thth, and again when it stations (stops moving) to turn into direct motion during the whole month of November.  What happens around July 25th will be indicative of what will happen in November.  November 3rd is election day in the USA, and the results may drag out as Trump is now stating that election will be rigged against him.  This period of squares does not favour the leader.  In a dictatorship, it could represent the government forces being deployed on the citizens at home (the 4th house is where Mars is transiting).  In talking to a few other astrologers, President Trump’s health comes into question.  Could this be a period where an illness can affect the his ability to carry on as the leader?

Mars, in a square aspect to Pluto, is never a good thing.  Pluto is about power, control, destruction, and death, and Mars is about war and action.  Square aspects are like rubbing two sticks together.  If what we see today will only get worse in September depending on what happens around the events of July 23rd (opposition to Saturn, square the Sun).   After going direct, this square aspect to Pluto will finally be over in early January 2021.

Let’s now take a historical perspective.  The figure below show looks at the five criteria mentioned above and looks at the sum of them. 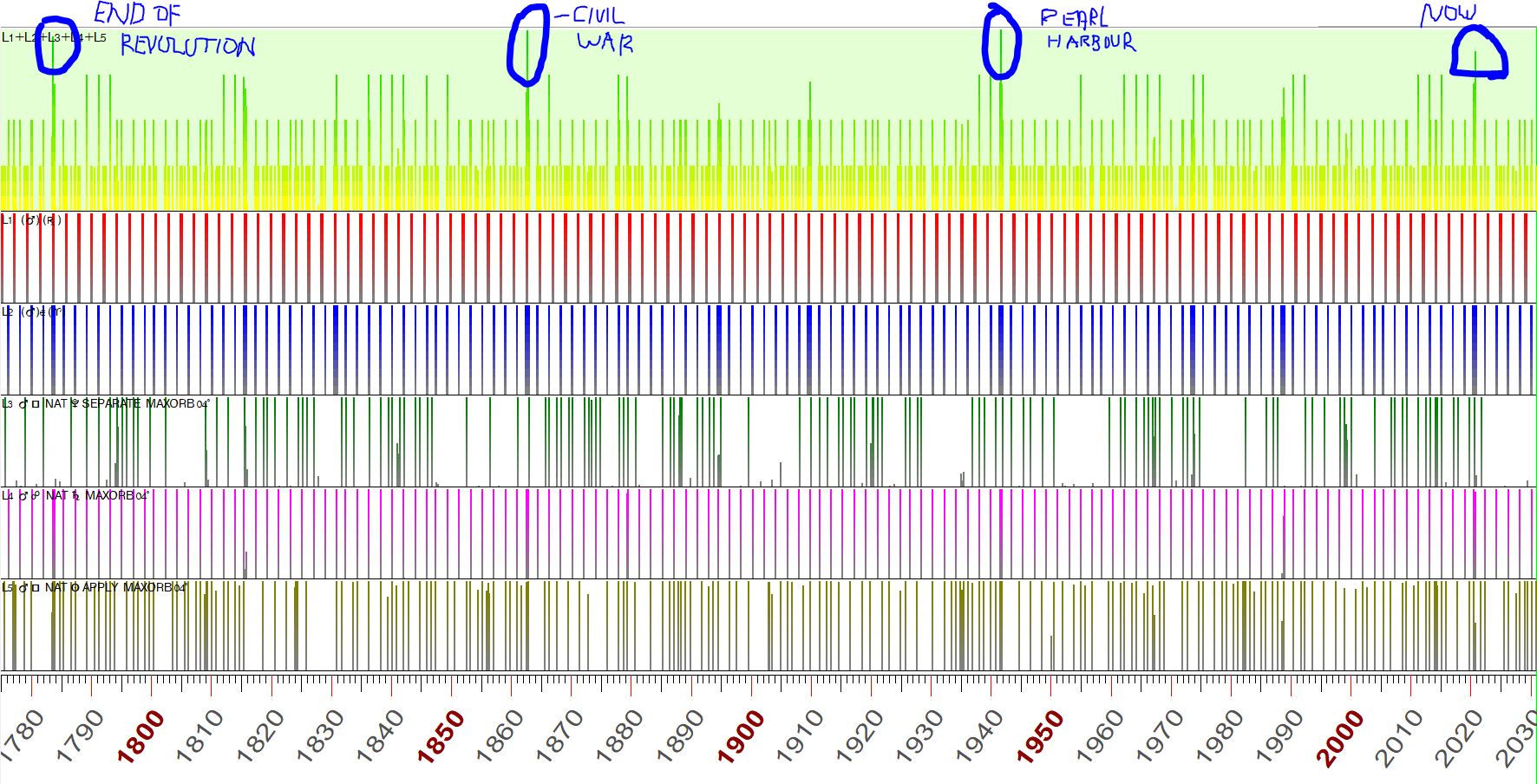 As you can see, there are four major peaks when all of the above occur at the same time :

What can this term bring about?  The other times this configuration happened it signified wars and attacks within the country, whether from hostile nations to internally.

President Trump’s chart does have some challenging aspects.  Note: various times are floating out there and much debate by astrologers but I will go with his rectified chart.  Transiting Uranus (sudden) squaring (harsh) to his Pluto (endings, transformation) which rules his 4th house of endings.  Transiting Pluto and Saturn are in his 6th house of illness in the 10:11 rectified chart.  If you look at the challenging aspect in his natal chart and compare it to the national chart, the problematic aspects seem to corroborate with each other.  Will he have to vacate the office for some reason or another?

Looking at his opponent for the upcoming election, Joe Biden, it appears his chart has some problematic aspects to it as well.  Could something happen to him?

If history has anything to do with this situation, then there will be more conflicts.  Maybe it is just in the form of rioting, which in itself is a conflict.  To me, the situation is more about frustration with the political climate and the disparity between the haves and have nots.  Let’s face it; people don’t like to change even if the system can be improved.

With these events happening this and next year, it is prudent to note that in February of 2022, the USA will have its Pluto return.  A fellow astrologer listed the start of empires and documented their fall after their Pluto returns.  Is the USA ready to fall after their Pluto return?  A lot of the planetary alignments leading up to the Pluto return are ripe for civil war.  The racial tensions are at a high.  The divide between the two-party system is so extreme.  We can speculate with the planetary energies but what will happen remains to be seen.