Saturn is the last of the planets visible to the naked eye, and therefore he is associated with time as his Greek name Cronos would suggest. Saturn is a planet of limits, rigidity, structure, constriction, law and order. It can represent our fears and reservations and as far as ancient astrology goes, death.  Saturn isn’t all bad as we need structure and determination to do anything.

Jupiter, as the counterpart, is about growth or expansion. It is about abundance, joviality, hope, success, philosophy, justice, and benevolence.  With all the enthusiasm associate with Jupiter, that can also spin into gluttony, over-confidence, and fanaticism.

One can see when these two get together in the sky their meeting makes us work towards something over the next period.  The planets also make these conjunctions in signs of particular elements for a period lasting roughly 200 years but not consecutive as there is a fall back period at the front end and back end of the period.

The elements of the signs are

The Great conjunction of 1087 was in the Earthy sign of Taurus. The Crusades in 1096 was the significant event of the period which, unfortunately, kept on going even within the Air conjunctions. During this period, the 1 June 1325 conjunction, heralded the beginning of the Renaissance in Europe. The conjunction happened in the inquisitive and knowledgeable sign of Gemini.   In Asia, it was the initial Black Death or the Black Plague. The subsequent Great Conjunction occurred in Aquarius, and that one signalled the onset of the Black Death in Europe. It had subsided for the first of the Water conjunctions but came back to Europe in 1385.

One of the more interesting charts of this period is the chart for the 1961 chart. This chart equates to the beginning of the sexual revolution in the USA. It also signalled what was known as the Women’s Liberation movement at that time.

In the chart, (1) Jupiter/Saturn are in the fifth house of self-expression and the house of sexual pleasure.  The birth control pill was released in the previous year, now allowing people to have sex without the risk of pregnancy.  The period saw the hippie era of free love to evolve with the square to Venus (sensuality) and the Moon (our needs, emotions) in the eighth house of taboos (2). The USA is quite conservative on the forefront; therefore, the sexual revolution also stirred the pot with the overtly religious factions in the country.

One can treat the Great Conjunction chart as a birth chart.  When transiting Venus/Jupiter conjuncted the Saturn-Jupiter point (3), it saw the 1973 rise in feminism and women’s liberation movement solidified.  Helen Reddy released her hit “I am Woman” in May, but radio stations would not play it. The song started gaining grassroots popularity and finally charting in December 1972.  (4) Saturn made its way up to the Midheaven, making matters visible for all to see.

What could the next 20 years bring about? This conjunction is particularly auspicious as it occurs on Solstice day.  In the northern hemisphere, the winter solstice is the rebirth of the light or a new year, a new beginning, and this year it is coupled with the Great Conjunction.

The conjunction occurs in Aquarius (1), the sign of social groups, freedoms, and innovation.  Aquarius also the sign of rebellion and individuality.  Uranus is the modern ruler of Aquarius and is associated with rebellion, individuality, and brotherhood.  It is in a conflicting square to the Jupiter/Saturn conjunction (2).  What can this signify?  In part, it can signify the end of globalisation that we have seen over the past few decades. (3) Venus (socialising) in Sagittarius (global) is separating from the conjunction.  However, at the same time, Uranus is telling us that we are on the same planet and as the pandemic has shown us that we need to work together. Therein lies the conflict.

They say that necessity is the mother of all invention. Since Uranus and Aquarius rule technology, we can probably expect to see a plethora of technological innovations over the coming years. The square can also suggest that the technology might not all be favourable to the general public. Look at China’s tracking of their citizens using facial recognition and control of their lives. Western governments might start employing similar methods to keep us “safe”.   With Pluto in an out of sign conjunction (1B), and Pluto in Capricorn (government, status quo) there will be a tendency for this to become increasingly plausible. Cities in the west are already using CCTV cameras to monitor activity.

Neptune (viruses) in Pisces (boundaryless) is in a semi-square aspect suggesting this pandemic is going to shape our outlook for the next 20 years. 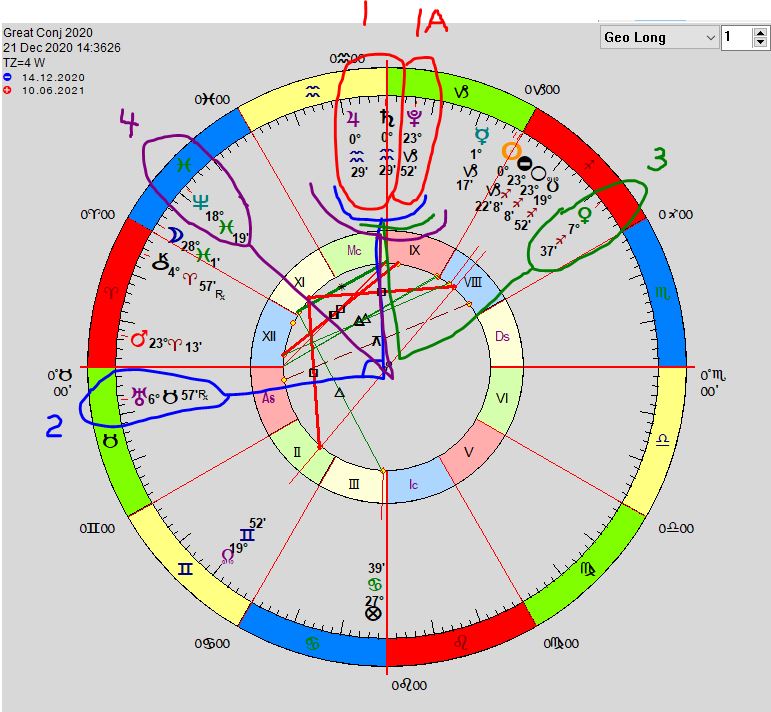 The chart for the Great Conjunction set for Washington DC  is quite telling.  The tumultuous election over but still causing waves.  The US chart has the conjunction (1) happening in the tenth house of government, and public view in the world along with the planet Pluto in the sign of Capricorn.  There could be constitutional challenges as a result.  The USA is heading for their Pluto return during this period.  (2) Coupled with Uranus (rebellion) on the Ascendant of this chart, one could easily suggest that a civil war can break out, or some states may seek greater autonomy. 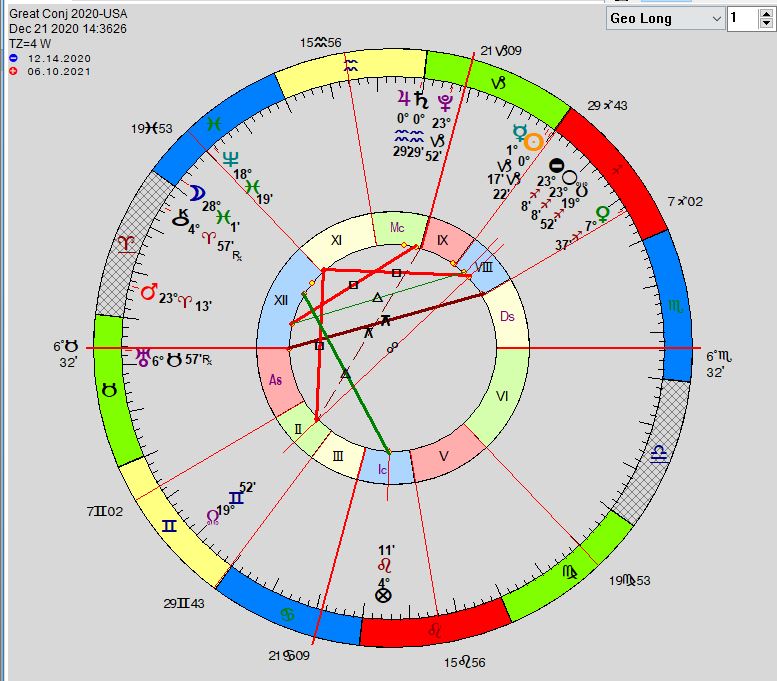 China’s Conjunction occurs in the third house of communications with Uranus in the seventh house of others.  This looks like it will be spreading its 5G technology or will have difficulties in its 5G technology as they try to deploy this technology, which can be subjected to the government’s spying technology. Countries who accept their technology will have to be wary of this risk and those that do not will have to deal with the ramifications such as potential trade issues .

All in all, we are in for an interesting ride and speaking of China, there is a curse which says “may you live in interesting times”.