How An Astrological Reading Can Help Your Relationship

Relationships can be a difficult thing.  Sometimes we are not in control of who we are attracted to but astrology can give us clues on how it will turn out.   With the death of Carrie Fisher, I was surprised to find out she was once married to Paul Simon for only a year.   According to the press, it was a rocky relationship but finally, it was Fisher’s addictions that were the last straw for Simon.

In terms of Fisher’s chart (see below), she has the Sun conjunct Neptune which is a signature of a film star but also that of a potential addict.  As far as relationships go, the Moon in her chart rules her house of relationships.  Her Moon is in a square or difficult aspect to Pluto, meaning she has the tendency to attract people who help to bring about the dynamics of control, manipulation, sexual tension, and explosive qualities into the relationships.  While that is the negative aspect, the positive takeaway for Fisher is that her serious relationships are highly transformative.  Venus is the natural ruler of relationships in any natal chart and because hers is opposite Mars, she typically has relations that are either confrontational and/or highly sexually charged.  So, she is either fighting or having sex, or both at the same time!

Simon’s chart (not shown) has Pisces on the cusp of the relationship house.  This means that he has a tendency to be drawn to the sensitive type but Pisces also relates to film stars, musicians and people with addiction issues.  Simon has Mars square the Moon which means he has an explosive temper likely stemming from issues with his mother which can play out in relationships.  Simon’s Venus (the natural ruler of relationships) is opposite both Saturn and Uranus.   His Uranus gives him the desire for independence and excitement in his relations.  His Saturn drives him to take control in relationships by setting rules and limitations on his partner.  What that boils down to is he likes to control and limit the other person but can not accept being limited and controlled by them which obviously leads to conflict. 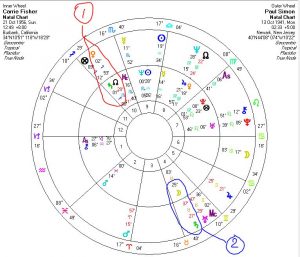 In a couple’s analysis, after looking at the individuals, the charts are superimposed on one another to see how one person relates to the other.  In terms of Fisher and Simon, they have Saturn opposite each other which is a generational thing as they are 14 years apart.  However, Simon’s Saturn is on Fisher’s Moon (marked as 2) which wants to control her emotions.  As she has a Neptune Sun, she wants to escape and her escapism is drugs.  Her Saturn is on Simon’s Venus (marked as 1) which is about her saying “prove to me that you love me” but because he needs independence in love, this is going to be a trigger point.  If they had understood this dynamic, they could have made adjustments to better utilize the energies in the Natal charts. 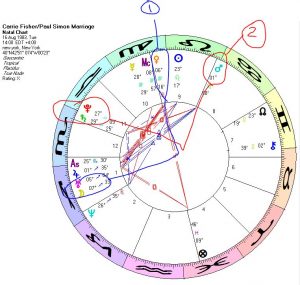 The Marriage Chart is another thing we can look at.  This is taken at the time of the completion of the “I Do’s” and is the birth chart of the marriage.  In Simon and Fisher’s chart, although I don’t have the exact time of the vows, the planetary influences at that time were not the best.  They were married on August 16, 1983 in New York, New York when the Moon (emotions) and Uranus (chaos, rebellion) were square or in a difficult aspect to Venus, the natural ruler of relationships (marked as 1).  Then there was the square of Mars (battles) and Saturn (control, fears) and Pluto (power, control, death) (marked as 2).   The marriage was destined to be doomed if they were not aware of their dynamics.

Obviously, I am skimming the surface of this analysis but you should be getting a glimpse into how consulting an astrologer will give you insight about not just your own personality, but also how you will mesh with your partner.   By knowing what makes you tick, you can make adjustments in your approach to others and situations.   The astrologer can also pick an opportune time for you to get married. And you know what they say?  “Timing is Everything”.

Want To Better Understand Your Relationship?

A couples analysis involves looking at both people’s charts and seeing how they interact with each other.  This could be a married/dating couple or even parent-child dynamic.  Understand who pushes whose button.  So why not push the button below to book your appointment.