Anger and Frustration This Week

This past week was a very difficult week (March 11-16) for me and for my wife.  On Friday, a friend posted on Facebook an expletive-laced meme that said she was happy she made it through the week without sticking a fork in anyone and she deserves wine.  This echoed my frustrations with people and tasks in general over the course of the week.

I copied the meme to my wall and my friends chimed in that it was a difficult week for them also.  One friend asked me if there was anything astrological going on.  Obviously, everyone has their own astrological chart so astrological aspects would be triggers for people individually.  In order to have a have a larger range to include groups of people there would have to be a connection to the slower moving outer planets (Uranus, Neptune, or Pluto).   I couldn’t spot the anything of significance.

After studying the chart for a few minutes, it dawned on me.  There is a point in the chart called the Galactic Centre.  The Galactic Centre is as it suggests the centre of our galaxy.  It is currently, at 27° of Sagittarius.  This is a point that I normally don’t pay much attention to but I know several astrologers who use this point.  It represents global events or that person who has connections to this point in their natal chart will have far-reaching influences.  This would suggest a global frustration and anger and the outlet would vary for people depending on where this lands in their chart. 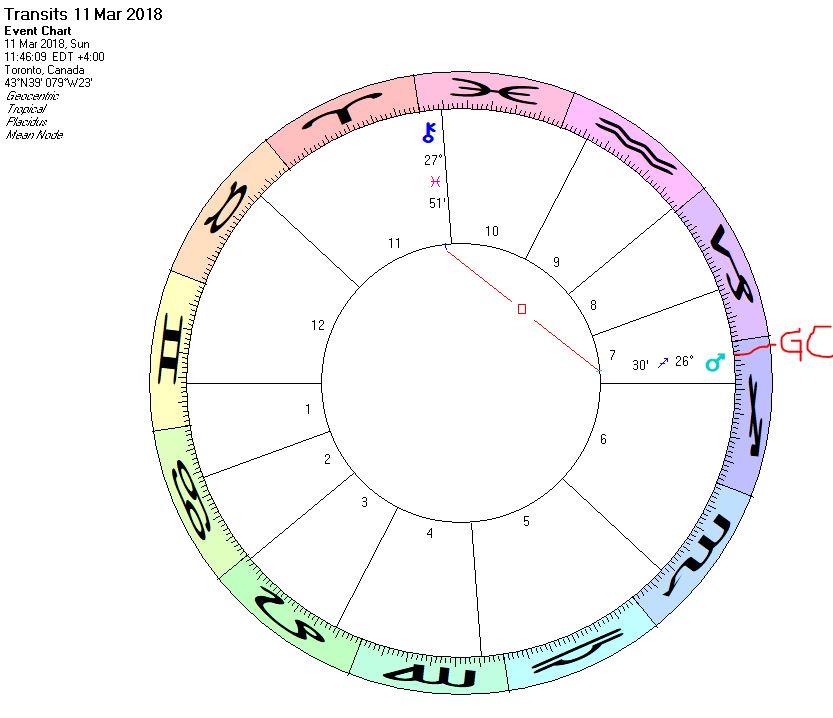 Mars was on the galactic centre all this week.  However, for me, it is positioned in my 6th house of work and that is when I decided this makes sense.  Mars is the planet associated with anger, frustration, violence, action, and passions as well.  With Mars being on the galactic centre, you will global actions.  In the USA, there were nationwide (Galactic Centre) walkouts from schools, where the students were protesting gun violence (Mars) and very passionate (Mars) to their government (Galactic Centre) to make changes to gun (Mars) laws.

Chiron is the asteroid which has to do with being a maverick, being a healer, being a teacher, or dealing with past wounds.  Obviously, in your own chart that would be a personal matter but affected by the larger community as a whole.  If we look at the larger scale example of the American student walk out.  They were talking of arming (Mars) teachers (Chiron).  Chiron (wounds) squaring Mars (violence) on the Galactic Centre (the American Nation).   I’m not suggesting the USA is the galaxy but this event had large scale effect.

On a personal level, this is about anger and frustration that might be triggering old wounds that are brought about by a larger scale such as your company (10th house or 6th house), your extended family (4th house or 3rd house), community (3rd house) or institution (12th house).  You would have to consult an astrologer to figure out how this would be affecting you.

All in all, this has been a lesson for me to see that I should pay attention to this point in the chart.