They were Hollywood’s perfect couple.  Two superstar actors and two wonderful human beings in the ideal romance.  What could possibly go wrong?   And could astrology give us some insight? 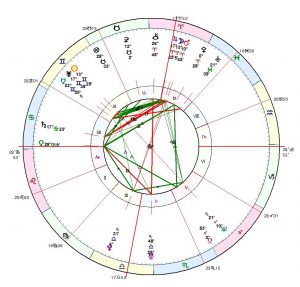 Let’s first get an understanding of Angelina and what makes her tick.  She is a witty, inquisitive Gemini as that is her Sun sign.  The 7th house of relationships has Capricorn on the cusp which usually signifies she prefers relationships that involve serious guys who are either older or younger.  Brad Pitt is 12 years older than her.  The ruler of Capricorn, Saturn, is in Cancer but also in her 12th house of undoing.

She is a Cancer rising, a sign that says she is naturally shy but likes family and is nurturer.  The Moon, which rules Cancer, is in the 9th house of foreign lands and is conjunct to Mars the ruler of her 5th house of children.  They are both next to Jupiter which is the planet that tends to exaggerate or make larger….children + plenty + herself + foreign lands?    It is no wonder why she’s adopting so many children and from foreign lands.  Saturn the ruler of the 7th house (partners) is in a difficult square aspect to the Moon the ruler of the first house (her). So he can potentially drive her nuts and challenge her. Note: this doesn’t only apply to him but all her relationships, so it is a life lesson.

Now let’s look at Brad’s chart.   He is a Sagittarius Sun and Sagittarius rising.  So he is very philosophical person looking to expand and very self-motivated.  He can become full of himself and be very impulsive.  He has Gemini on the cusp of his 7th house of partners, and Angelina’s Sun is right on the cusp.  A very strong position, so he is naturally drawn to her.

Mars rules his 5th house of children, and it is in his first house, so he is naturally comfortable with them.  His chart calls out for many too because Jupiter (many) is in a square aspect from the 4th house of home.  However, he isn’t as comfortable.  Mars is on his south node which means he’s done this before in past lives if you believe in that stuff.  Opposite of his north node, it suggests they hold him back from relationships and moving forward in his life.  He is a controlling and intense guy as Pluto (power/control), and Uranus (rebellion) are both in a square or harsh aspect to his Ascendant (him) and to his Descendant (partners).  They are in a positive trine aspect to Mars, which means if the kids behave, he is good; otherwise, they need to lookout.

Brad Pitt has a lot going on in his chart.  Firstly in Transits, we see 4 major hits.

Both Neptune and Saturn are also afflicting his Chiron.  Chiron represents some previous hurt he was dealing with, as well as that he is somewhat of a maverick.

In a predictive technique called Solar Arcs, he has three hits in the chart.

So in conclusion Brad is going through quite a bit this month.  He has a sense that he needs to break free from the relationship or restructure it.  If you are conscious then you can navigate through this period albeit with difficulty.  If you let your worst out, you’re blaming the marriage, looking for outside comfort.

How about Angelina?  What does her chart say about all this?  In transit, she has several hits related to her 5th house of children.

As you can see, both people are dealing with various struggles of their own.  It doesn’t necessarily have to signify an end of a marriage.  By consulting an astrologer, you can figure out where you are both at and realise when the difficult periods and issues will end.  You can gain an understanding of what you are going through and how to deal with it.   Or then again, you can just split up and call it quits.

If you are having issues or just want to know how to get the best out of each other, contact Franco to book your appointment.