THE SATURN AND PLUTO CYCLE – DEATH, DESTRUCTION AND DOWNFALLS

As astrologers, we study planetary cycles.  Planetary movements relative to the planetary positions at birth give us an indication of what will go on at any given time.   This is not to say that the planets are dictating the events in our lives.  The planets reflect what is going on in our lives, as is stated in the Emerald Tablet of Hermes Trismegistus “as above, so below, as the universe, so the soul”

Mundane astrology is the practice of looking at world events through the lens of astrology.  Many astrologers will look at an event after the fact and connect the dots, while an excellent mundane astrologer will have a good sense of what will happen ahead time.  I write this during the COVID-19 outbreak, and I watch the stock market crash. I remember a lecture from a few years back where financial astrologer Bill Meridian, who is an award-winning market trader under his real name, talk about the Bull market in 2019 and how that will crash in 2020

While the Saturn/Pluto cycle on its own is not always representative of the market, it can be a potential or catalyst.   Let’s look at the meaning of these two planets and what cycles mean before we go down the historical path.

Saturn was the end of the solar system.  It is the furthest planet that we can see with the naked eye, although under certain perfect circumstances we might be able to get a glimpse of Uranus, Saturn is the marker.  Saturn, therefore, is given the title of Time Lord.  Remember, Saturn is the Roman name for the Greek god Cronos, where we get the word chronology or time.  Saturn has a 29-30 year cycle around the Sun and represents generational cycle

Pluto was only discovered in the 1930s, so its use in astrology is very recent.  It has been assigned rulership of the dark and mysterious sign of Scorpio.  Pluto was the god of the Underworld, the place where the dead go after life here on earth.  It was full of treasures and was, apparently a place of beauty.  Astrologically, Pluto represents death and transformations.  Before Pluto, death was ruled by Saturn, the time lord.  Therefore, they combined hold the distinct honour of this role.

Since Pluto is associated with the Underworld, it will rule things that are underground such as mines as they have treasures under the earth.  Pluto also rules hidden things, so that means secrets.  Pluto rules things of power, such as nuclear energy, or the mob leader or authoritarian regime or leader.  Pluto can also rule things such as obsessions.   Pluto can also be cruel and sadistic acts

While it comes across as nasty when appropriately used, it can be about transformation for the better.  This is why Pluto is associated with psychology, and the obsessive drive can lead to the ability to get things done.

When planets are orbiting the sky, they will be in different positions because their orbits are different.  Astrologically, we use aspects that were defined by the ancient Roman astronomer, geographer, and mathematician, Claudius Ptolemaeus (127-145CE), otherwise known as Ptolemy.  The planetary aspects he used are:

Sextiles and trines are usually seen as positive aspects.  Conjuncts can be both because it can good thing or too much of a good thing making it a bad thing.  For squares image rubbing two sticks together create friction and the oppositions, a tug of war, are seen as challenging aspects.  In a birth chart, these aspects give the person their energy, so they are not always viewed as good or bad.  If a person has too many trines, they may understand things easily or have a lot of talents but cannot get things accomplished because there is no drive or incentive.  You need squares to bring in tension to achieve something.

For a basic introduction please refer to this article.  <Click here>

In mundane astrology, we look at the harsh aspects (0°, 90°, 180°) as the significant events.  With two powerhouse planets like Saturn and Pluto, one would expect the harsh aspects to bring about some significant events in the world.  Below is a graph showing the timeline of the harsh aspects between Saturn and Pluto.  If you look at the timing, you can spot significant timeframes.  This graph looks at 4° orbs from the exact positions of the square.  Example: If Pluto is at 4° of Capricorn, we will examine Saturn from 0° of Capricorn up to 8° of Capricorn.  Mundane-wise the effective orb is usually looser than 4°, but I have tightened it to reduce the number of events.  Here are the Saturn-Pluto aspects from 1900 to 2030. 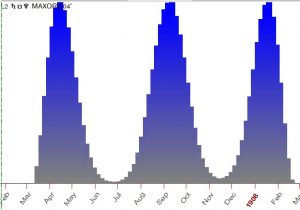 SOCIAL
Not all bad things happened at this time, but there were challenges to the status quo.  As Venus (women) was opposite Pluto in February and squaring Saturn, 400 English suffragettes stormed Parliament leading to 60 arrests.  When Venus came into a conjunction with Pluto and squaring Saturn during the summer of 1907 it was at this time we saw Finland giving women right to vote and Norway allowing middle-class women to vote in parliamentary elections.

Pluto rules mines and explosions three prominent ones occurred in the USA:

Pisces rules the oceans and seas and Pluto death:

In May of 1907, there was an outbreak of the Bubonic Plague in San Francisco, California, USA.  The last case was diagnosed at the end of January 1908.  There were 159 infected and 77 deaths. 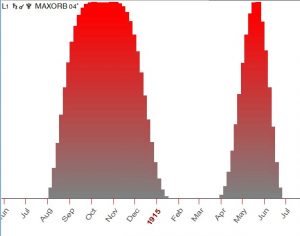 Saturn and Pluto are in Cancer, in the sign of home and roots.  People will dig into their turf and stand their ground.   On 28 July 1914 war broke out in Europe as the Austria-Hungary declared war on Serbia which brought in the Russians a few days later.  Germany sided with Austria-Hungary with Italy on the sidelines.  When Venus and Mars were conjunct each other and square Saturn and Pluto on 12 August, France and Britain joined the war.  Pluto was conjunct again when Italy joined allies on 23 May 1915.  The war lasted until 11 November 1918.  This war led to 20 million deaths and another 21 million injured.  It mobilised 70 million armed forces.

HEALTH
From January 1918 until December 1920, the world saw the major pandemic called the Spanish Flu.  It is believed to have affected 500 million people causing anywhere from 17-50 million deaths.  Some estimates put it close to 100 million deaths.  While the outbreak did not occur until 1918, it is believed the Spanish Flu started in the trenches of World War I.  Trench warfare had people living in close proximate with corpses and rats, making it a breeding ground for diseases of a pandemic scale.  When the soldiers were sent to hospitals or sent home, they would spread the disease to those there, which has led some researchers to speculate that it was actually around earlier 1918. 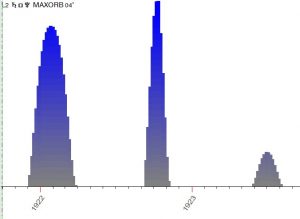 While this period in time is not as horrific or extreme, it is one that starts laying the foundation for events to come.   Cancer is about family, roots, and home and Libra about fairness and balance.  The following events can reflect those themes.

In Germany, hyperinflation continued growing. By December 1922 it took 7,000 marks to buy a single American dollar.  A lot of this was due to reparation dues to the Allies from First World War.  Right-wing and left-wing factions were at odds with each other over the economic turmoil with as many as 400 political murders occurring during this period.

SATURN IN CAPRICORN OPPOSITE PLUTO IN CANCER 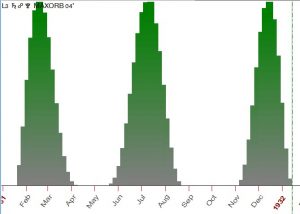 While Pluto-Saturn isn’t always about disasters, scientist Ernest Lawrence invents the cyclotron, a device used to accelerate particles to study nuclear physics. At the same time, Albert Einstein and astronomer Edwin Hubble begin researching at the California Institute of Technology.

Pluto in Cancer has themes of control of the homefront.  Saturn is in the diplomatic sign of Libra.  The events here were under the guise of diplomacy. 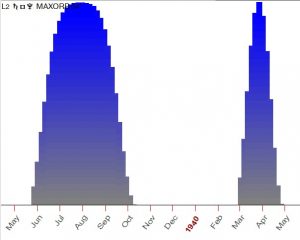 Saturn is in the confrontational war-like sign of Aries in aggressive square aspect to controlling Pluto in the sign of the homeland. 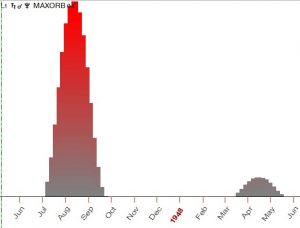 This period saw the rise of a couple of global groups:

Not all new organisations were good ones, as the Hells Angels motorcycle gang got started in California.  They have now grown into a global operation with chapters all around the world.

The World Medical Association (WMA) is formed this year.  It is an international confederation of free professional medical associations. Like CDC, the WMA would launch Influenza Immunization Campaigns.

There was an major epidemic of Polio in England and Wales. 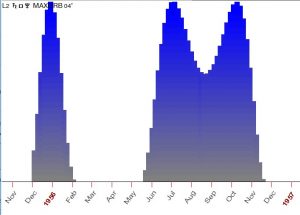 The second known case of an airliner being destroyed by a bomb over the mainland US 1 November 1955.  A time bomb got placed in checked luggage of the DC-6 United Airlines Flight 629.  It killed all 44 people on board.  John Graham planted the bomb to kill his mother so he could claim the life insurance policy placed on her.  Up to this point, there was no law preventing the sabotage of an aircraft on the law books.

HEALTH
Asian flu pandemic originated in China probably from ducks in late 1956.  In February 1957, the Flu spread from China to Singapore and then in Hong Kong by April.  It made its way to North America by June.  As in most cases of Flu, the elderly were the most vulnerable. Estimates of the number of deaths vary worldwide ranging from 1 million to 4 million, but the WHO approximates it was two million.

Jonas Salk announced a vaccine against Polio on 12 April 1955.

SATURN IN PISCES OPPOSITE TO PLUTO IN VIRGO 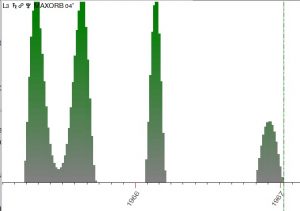 As Pluto has to do with nuclear power and Pisces the vast unknown, the 3 April 1965 launch of the world’s first space nuclear power reactor, SNAP-10A, is a significant event. It remains in low Earth orbit and is operational for 43 days.

Around this time, one person returning to Haiti from the Congo is thought to have first brought HIV to the Americas, eventually leading to the AIDS epidemic.  Also, in the USSR the A2 influence epidemic was rampant.  It was referred to as the 4th wave of the Asian Flu. 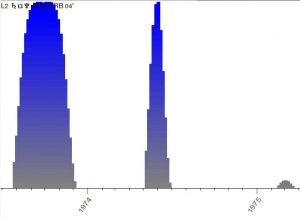 Cancer is also a sign of security and Libra is about fairness and equality.

Mayday 1973– An estimated 1,600,000 workers in the United Kingdom stop work in support against the government’s anti-inflation policy.  It was referred to as a Trades Union Congress “day of national protest and stoppage”.

DISEASE
Over 15,000 people in India died from smallpox between January and May 1974. 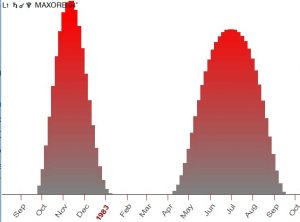 A global surplus of crude oil causes prices to fall, resulting in a brief but severe recession in North America.

The AIDS Epidemic starts as the term is first used in September 1982.  In 1983, they were referring to it as a gay disease and some calling it the “Gay Plague” for years after.  It took a while before the rest of the population started to catch on and the phrase “no glove, no love” caught on. 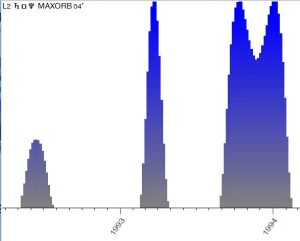 SATURN IN GEMINI OPPOSITE PLUTO IN SAGITTARIUS 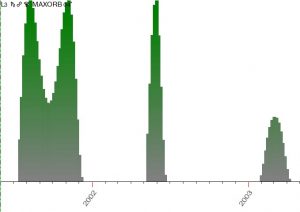 On 1 February 2003, the space shuttle Columbia broke up on re-entry into Earth killing all seven astronauts.  That would be the last space shuttle flight as the program was cancelled.

On 11 September 2001 two planes fly into the twin towers of the World Trade Center in New York City causing the two towers to collapse.  This begins the “War on Terror”. 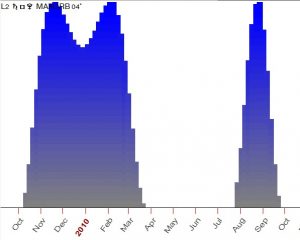 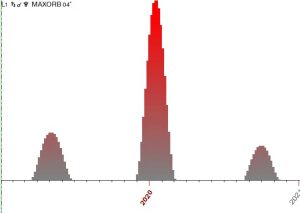 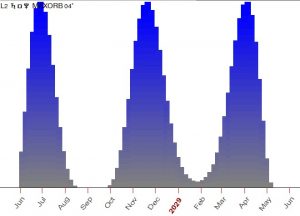 Pluto in Aquarius can represent controlling technology such as facial recognition, micro-chipping.  Saturn in Taurus could be how our bodies are used.  It can also represent a cashless society and more government control of our finances – no more delinquent payments.  You may be debited automatically for any transactions.   Pluto in Aquarius can be the elimination of globalism or a global government.